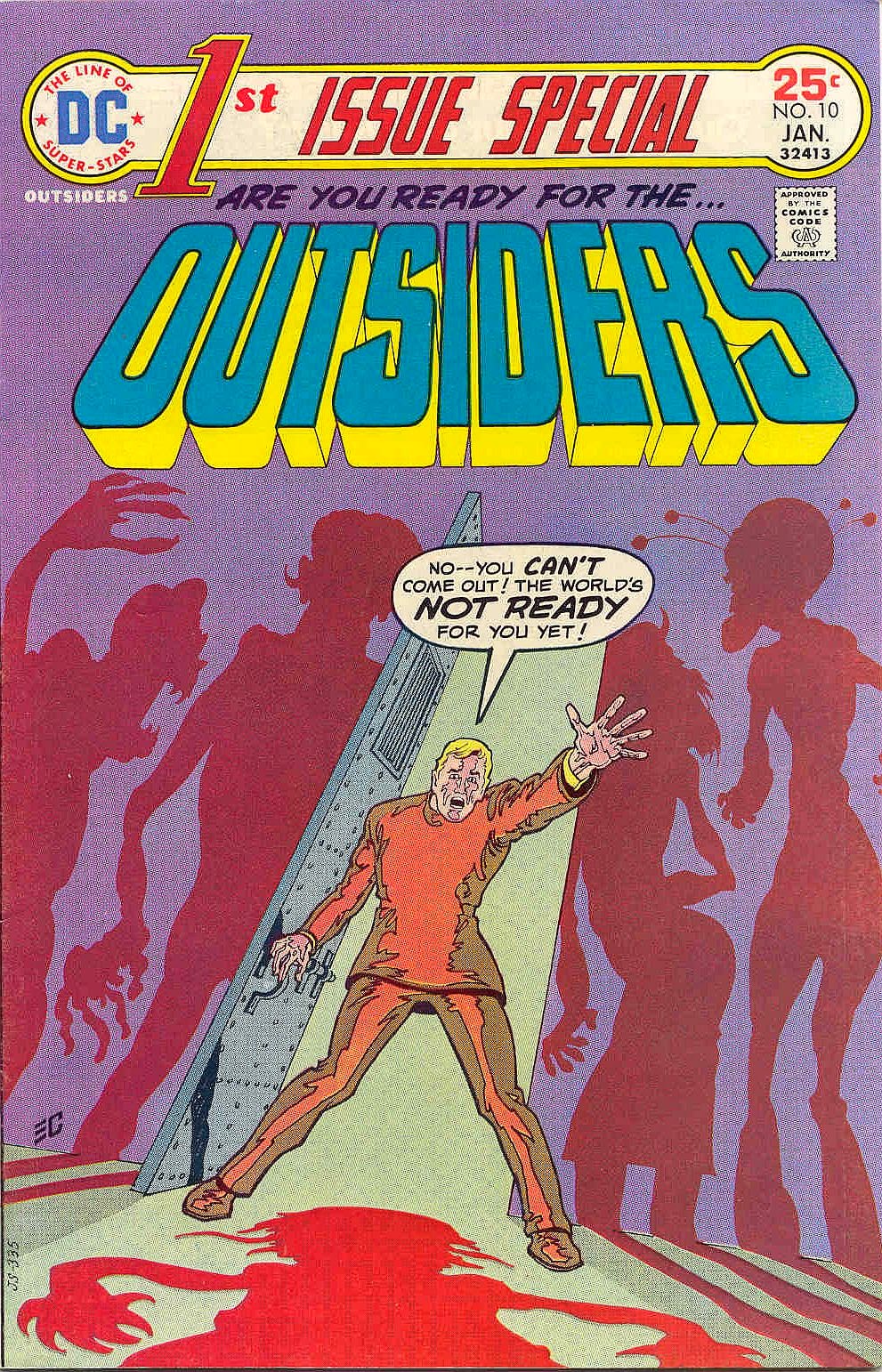 Most comic fans know the Outsiders as a team formed by Batman after he had left the Justice League of America. But would you believe the original Outsiders were a group of freaks not meant to be seen among society? In fact, they really aren't even super-heroes, just hideously deformed creatures that will beat you up if you mess with one of their own!

Created by Joe Simon with artwork by Jerry Grandenetti, the original Outsiders first and only appearance was in First Issue Special #10. In the group is Amazing Ronnie, a four-armed cyclops, Mighty Mary, a woman with scales and huge fins for arms, Lizard Johnny, a reptilian, Hairy Larry, who is fused to the team's vehicle, and Billy, a baby-faced invulnerable kid with a huge head. Lead by Doc Scary, the group lives within a top secret bunker which resides underneath the hospital where Doc works.

The story begins as Doc Scary finds the group watching a news report about a freak causing a ruckus in town: 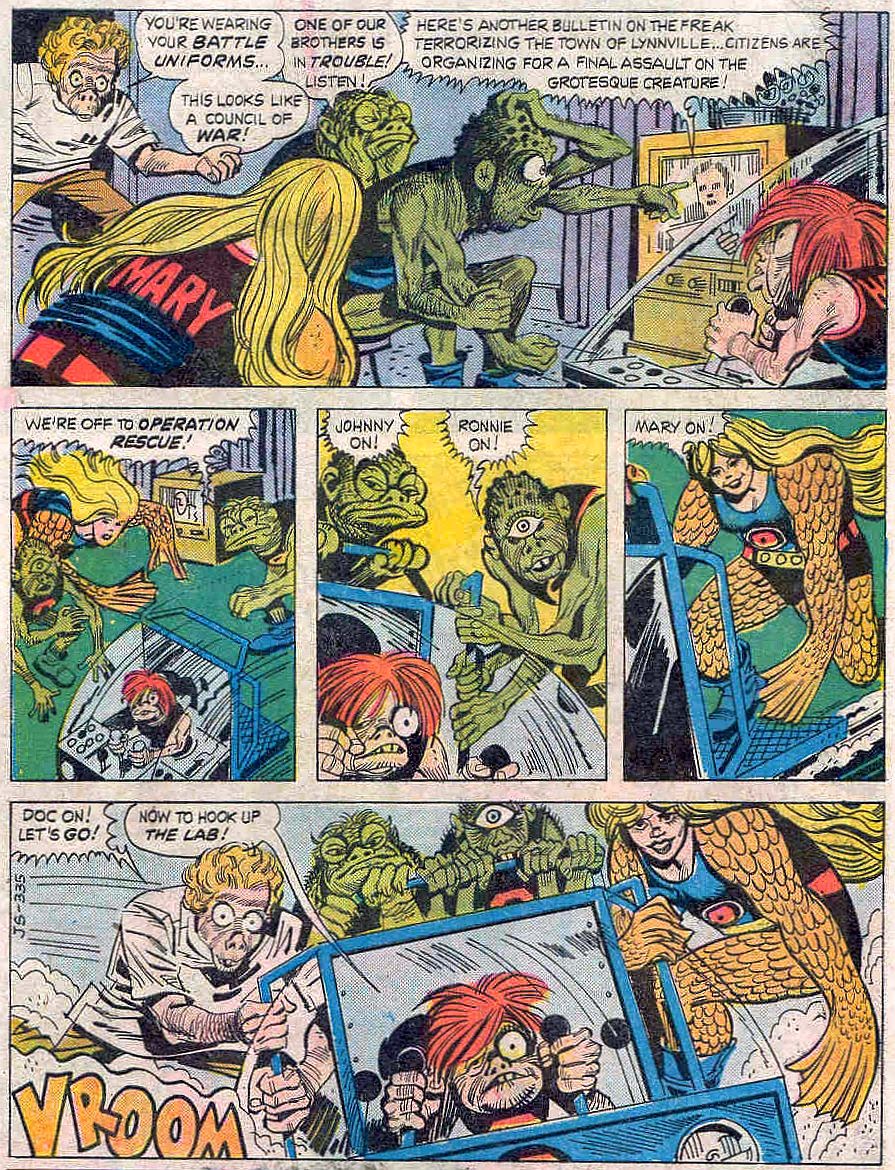 They hop into Hairy Larry's car and off they go to try and save the freak, complete with their own special theme song! 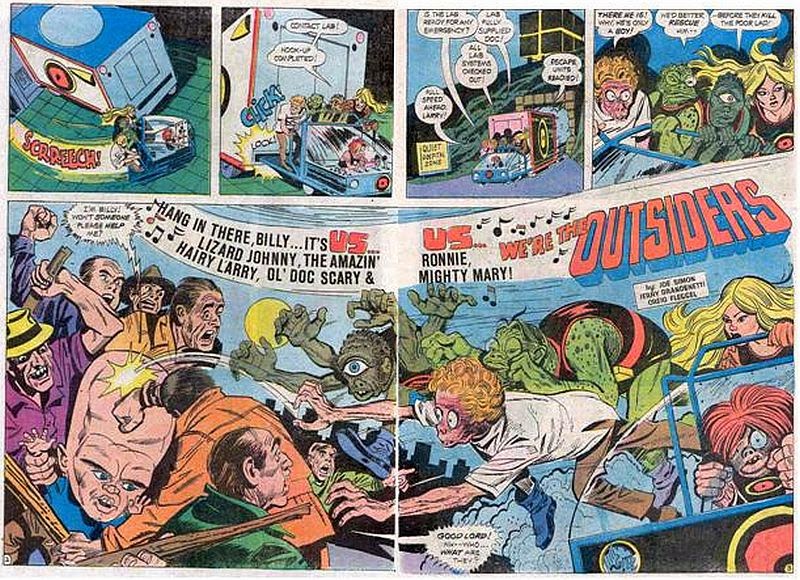 These Outsiders waste no time in attacking the mob that has captured Billy. Hairy Larry even runs a few people over! 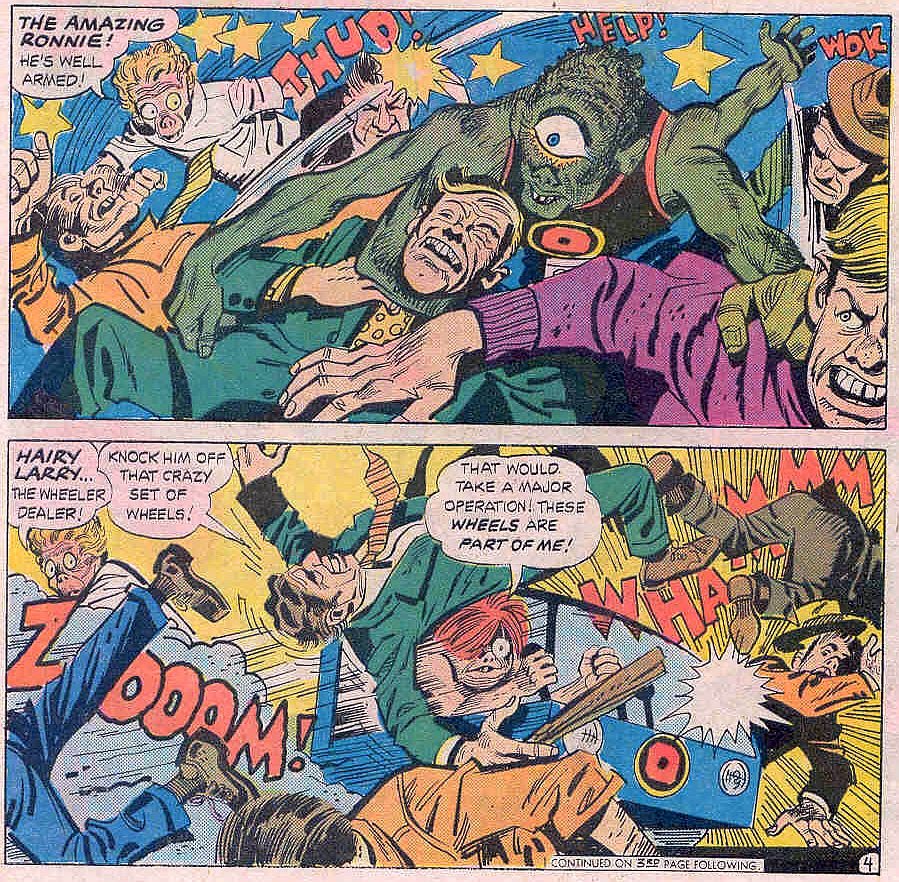 Mighty Mary steps into the action using her beauty...and brawn! 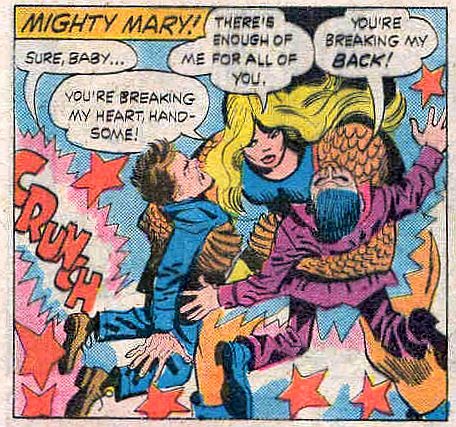 After Billy is saved and the angry mob is basically dead, the story segues into a few origin tales. First up is Lizard Johnny, who was caught by a fisherman and brought to Doc Scary's hospital, where another Doctor decides that killing Johnny is the best way to go. Doc Scary disagrees... 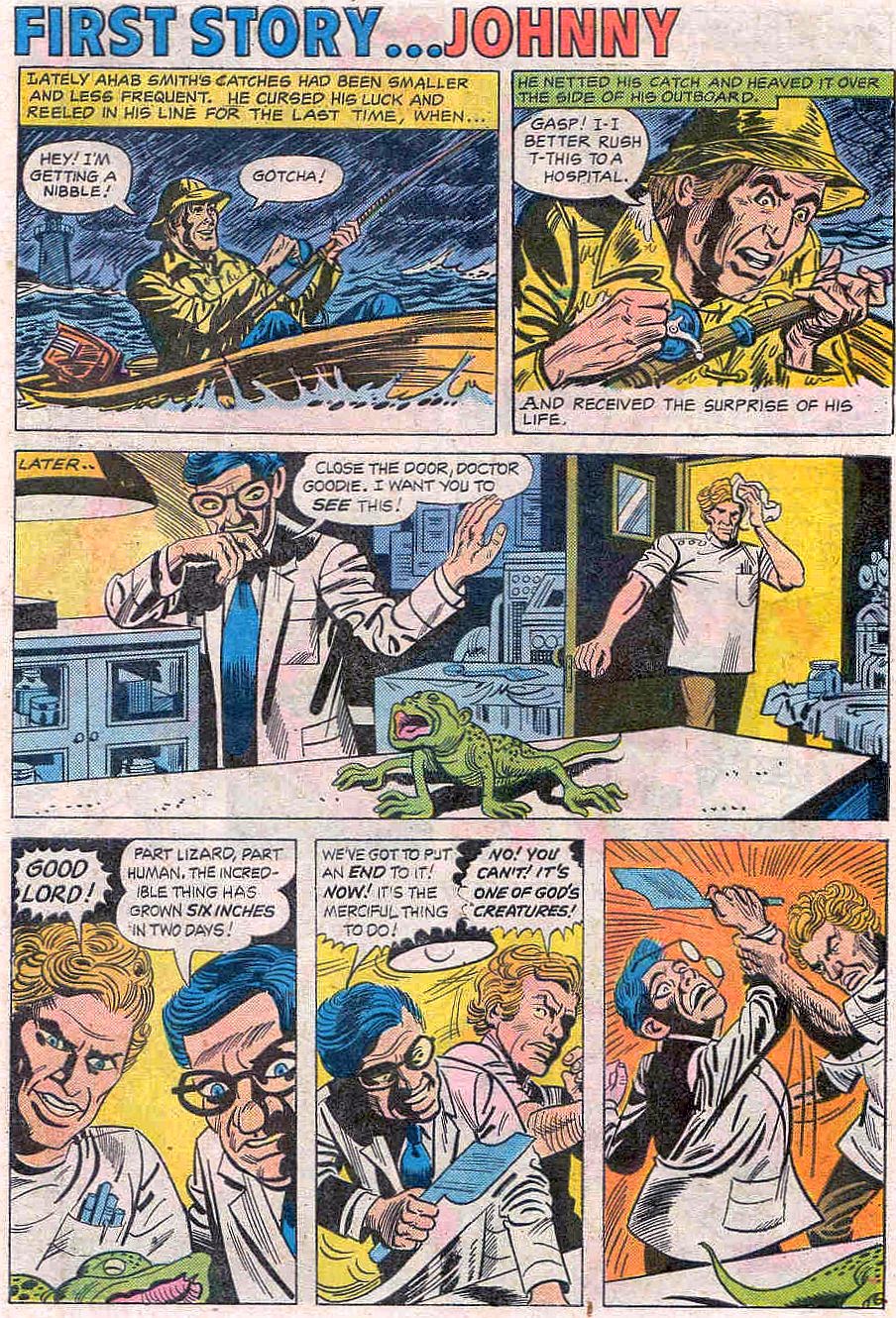 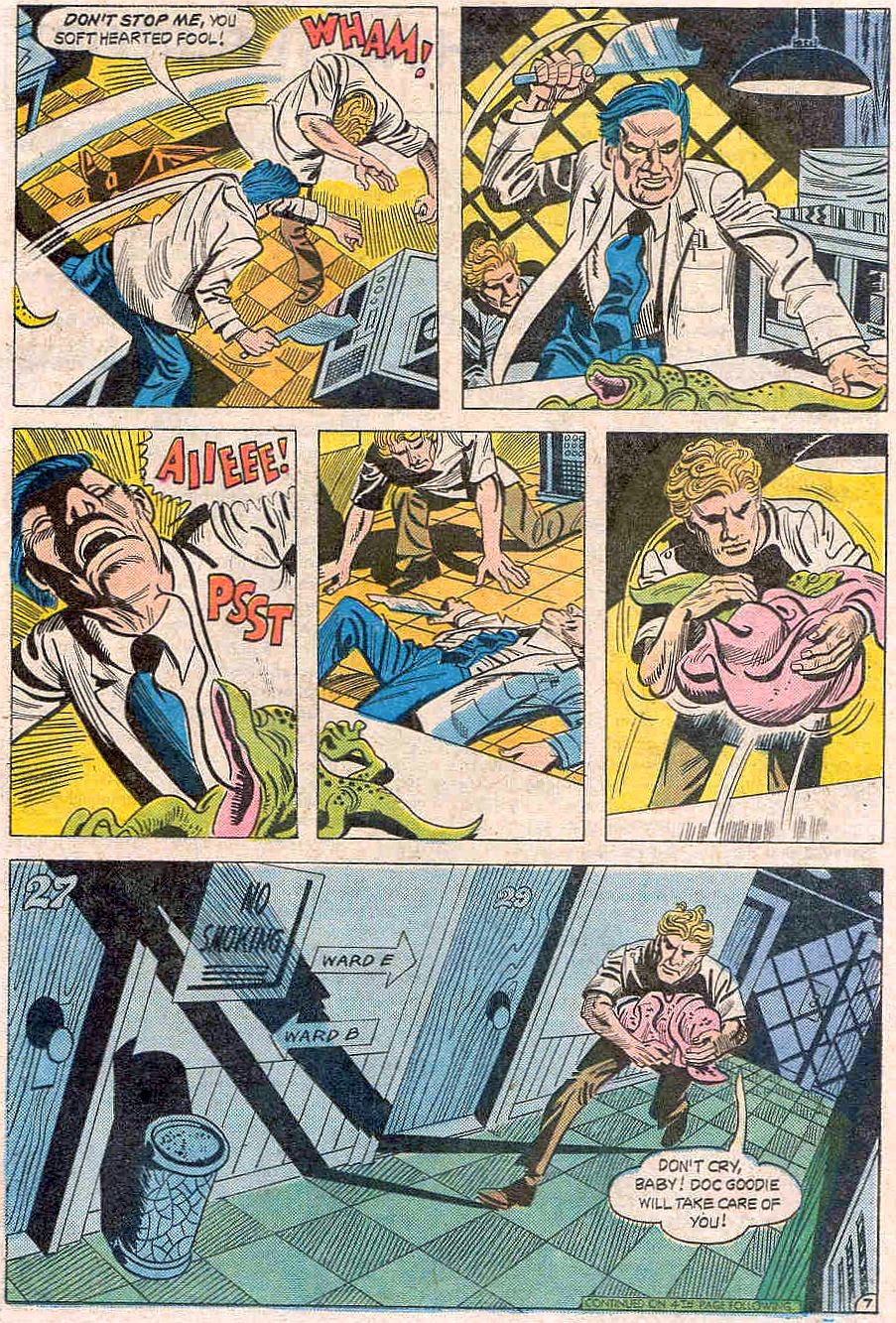 Next is a background on Billy, who had been kept safely hidden away inside Mr. Lundy's Tailor shop, that is until a few burglar's decided to rob the place: 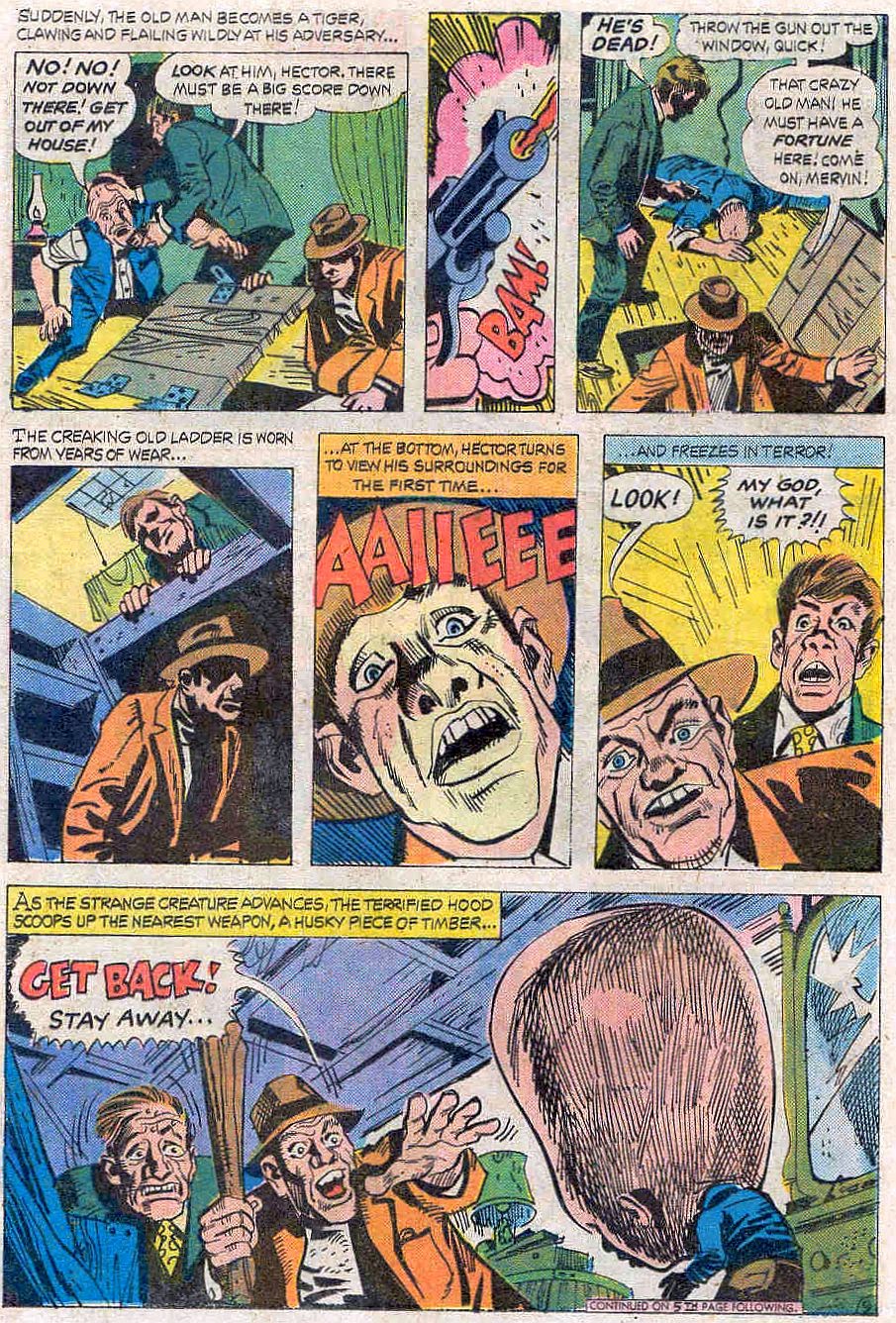 The intruders try to light Billy on fire, but what they don't realize is that the kid is invulnerable! Billy simply runs over them as he is engulfed in flames. 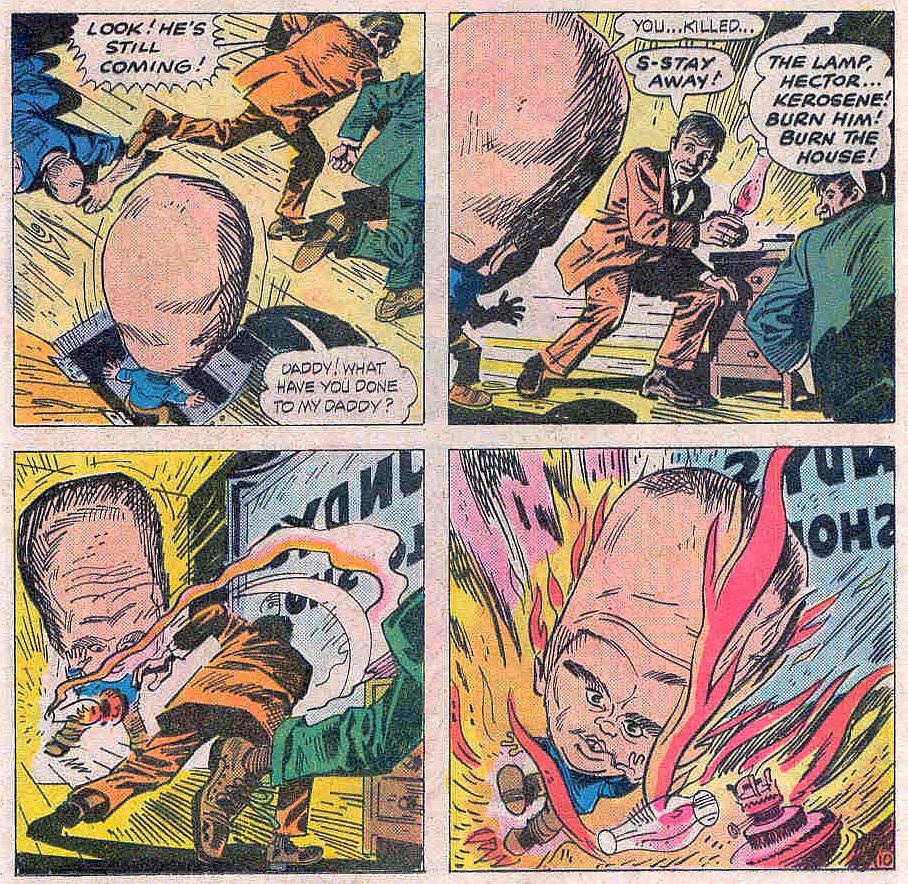 Next is the origin of Doc Scary, who initially was an astronaut involved in a crash on Venus. There he is revived by aliens, but I'm not so sure he's going to like the results... 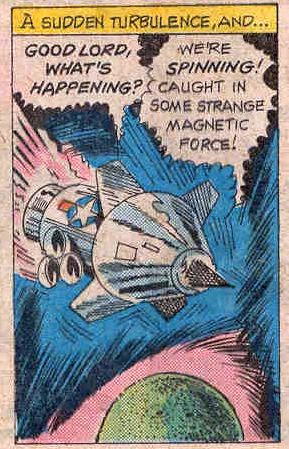 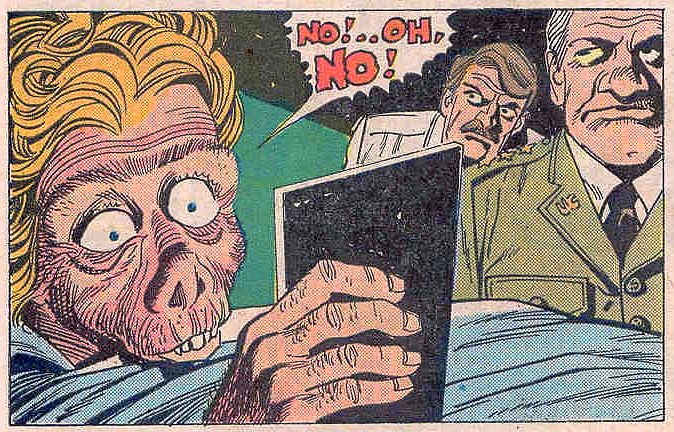 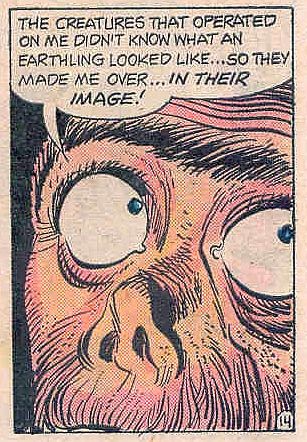 The last story talks about the "strange things down below the medical center!", where we learn of the Outsiders' dwellings, and Doc Scary's penchant for flirting with beautiful nurses (who have no idea what he really looks like). 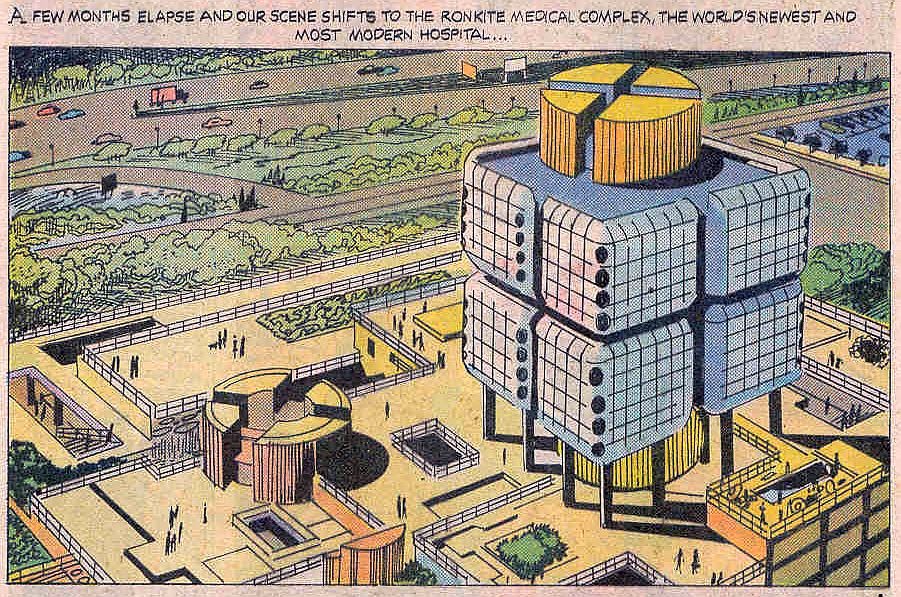 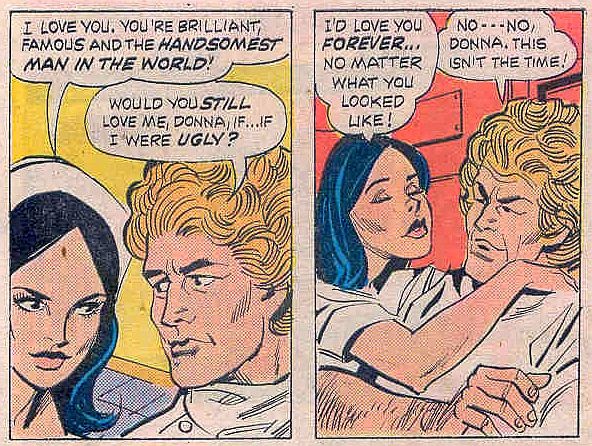 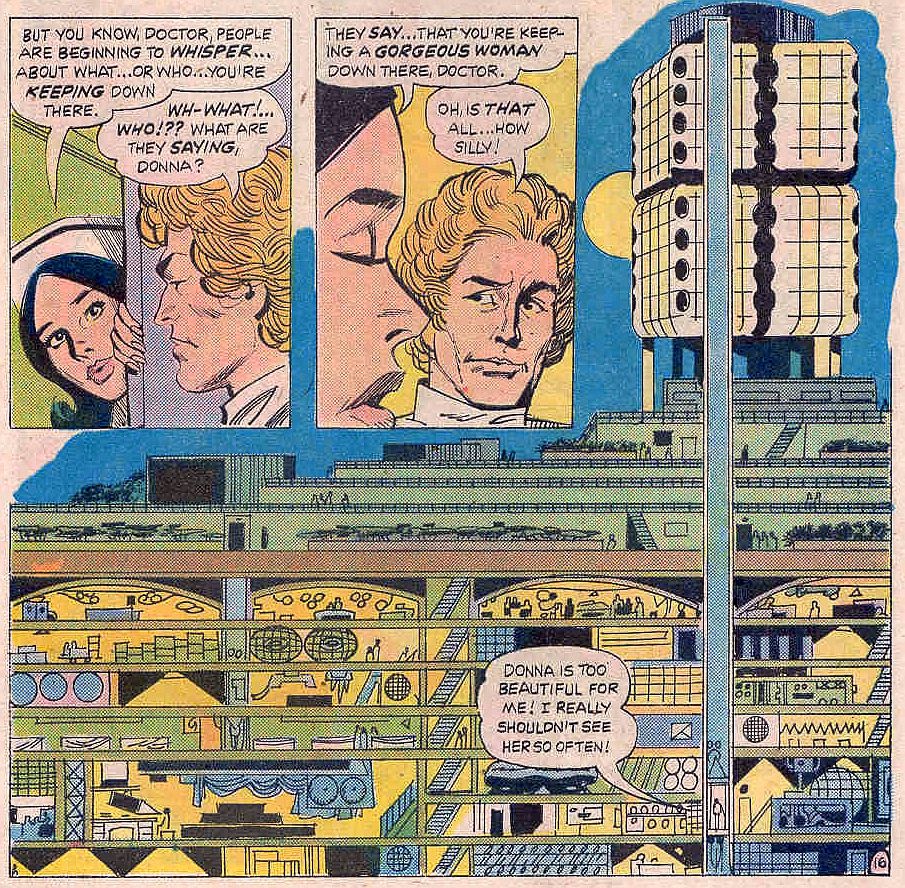 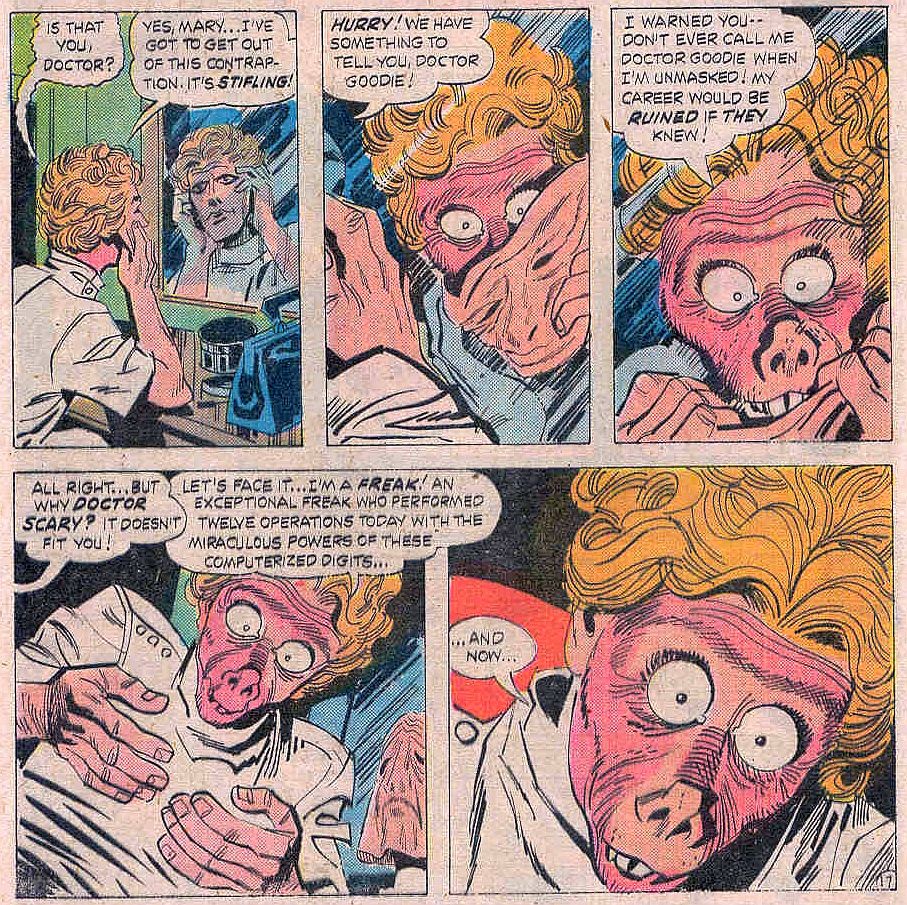 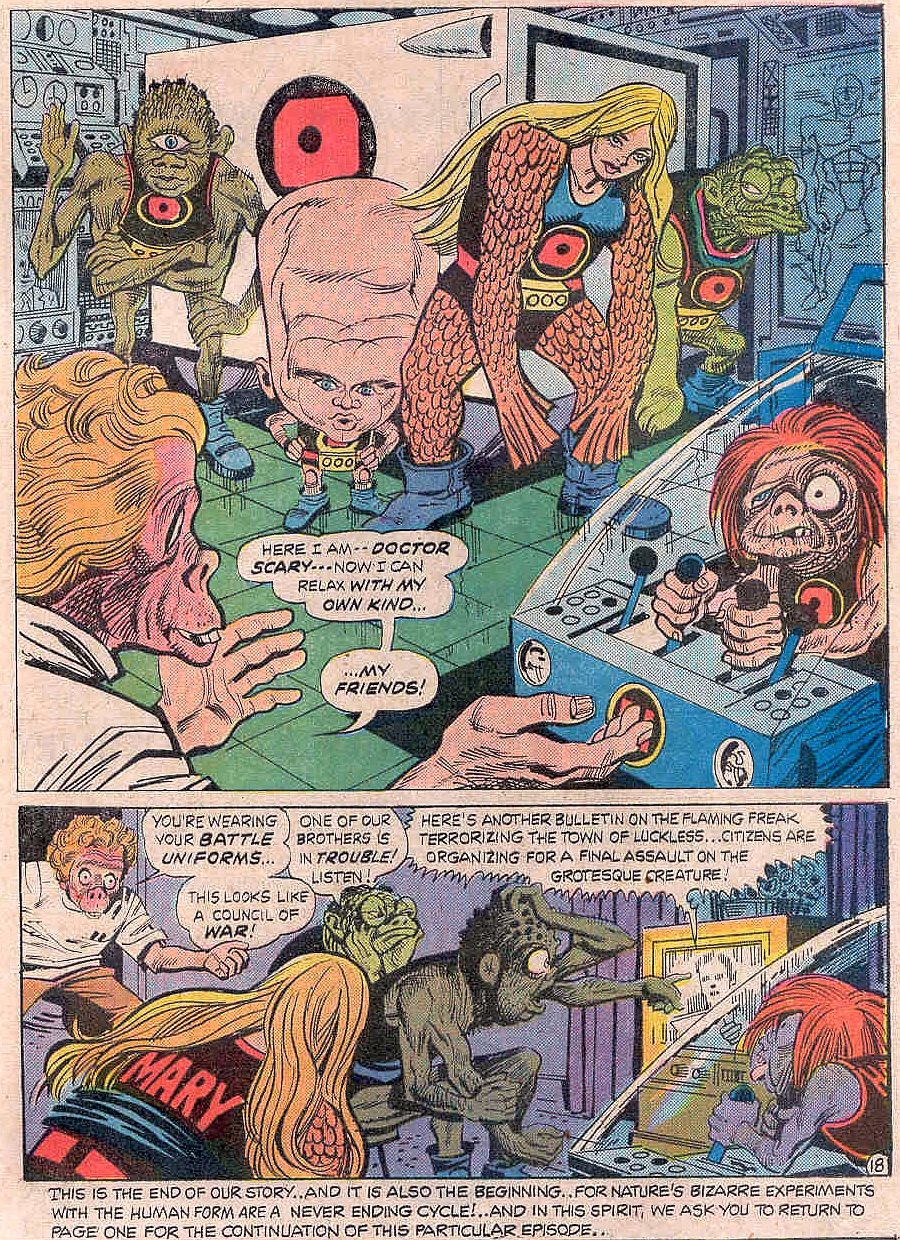 And once again Doc Scary finds the team ready to go rescue another freak...and put the beat down on the angry mob in the process! The strange thing about this comic was the Outsider's methods of dealing with the public. Instead of using their powers for good in an attempt to try and show people that they were more than just deformed freaks, they used them to hurt others only when one of theirs was in trouble. They were dangerous to anyone that opposed them, and used no discretion with their powers. Interesting.

Although this version of the Outsiders were never seen again (although they have a small cameo in Superman #692), the logo was retained for Batman's Outsiders, first appearing in 1983. Why they used the same logo style I have no idea, but I've always wondered what it would be like if Batman himself had recruited the freaks under Ronkite Medical Complex instead of the team members he initially had chosen. I think that could have been pretty awesome. It would have at least made for a great "What If" issue, but alas...

Email ThisBlogThis!Share to TwitterShare to FacebookShare to Pinterest
Labels: The Freaks come out at night 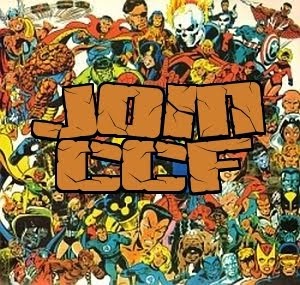 Do you enjoy talking about Bronze Age or other classic comics? Than the Classic Comics Forum is the place to be! Join CCF and discover a wealth of knowledge from the nicest comic book fans on the net.

It was an era that saw Spidey's girlfriend die, and let Green Arrow's sidekick shoot heroin. Anti-heroes such as Wolverine, The Punisher and Ghost Rider became the norm. Sorcerer's unleashed black magic upon savage Barbarian warriors. Monsters rose out of the muck-encrusted swamps. Scantily clad heroines infiltrated the action, and Hulk vs. The Thing was the main event. It was all awesome.

Welcome to the Bronze Age.

I'll be posting random comics and artwork from the Bronze Age (which is typically comics from 1970 to 1985) on a weekly basis.

All images are owned and copyrighted by the original creators. Open the images in a new page to read them enlarged. Content holders, please contact me if a scan is requested to be removed. Enjoy!